Foment de Sitges, in collaboration with the town councils of Sitges and Barcelona, is finalising the details of the 64th edition of the International Vintage Car Rally, to be held on 19 and 20 March 2022. After two years in which the caravan of historic vehicles has not been able to take the start because of the coronavirus pandemic, the event recovers the characteristic features that have made it a reference at European level in this type of event. 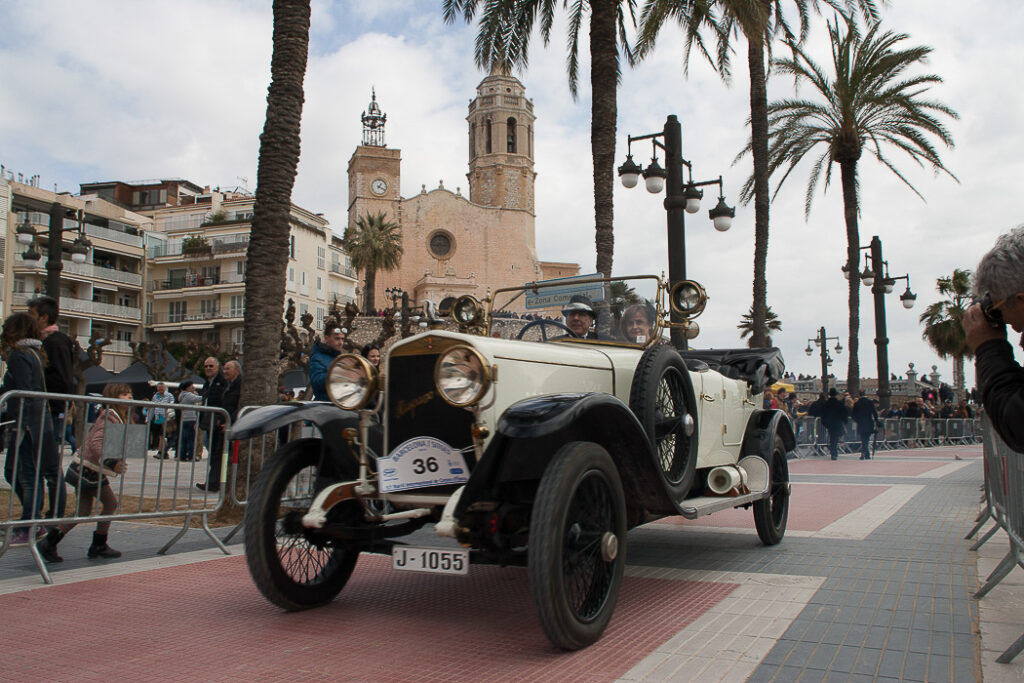 The Rally will once again feature a large number of vintage cars and motorbikes, many of them centenary, from various national and foreign locations. As the regulations state, only cars produced up to 1928 and motorbikes up to 1938 may officially participate.

A poster with a sporting vocation

This year, for the creation of the poster, we wanted to pay tribute to Amilcar. Active between 1921 and 1939, this brand based in Saint-Denis (France) achieved a well-deserved reputation as a manufacturer of motorcycles. These were three- or four-wheeled vehicles, weighing up to 350 kg and with a cylinder capacity of less than 1,100 cc, which therefore received certain tax benefits. Halfway, therefore, between motorbikes and conventional cars, Amilcar’s “cyclecars” stood out for their use of more advanced technical solutions than those common among their competitors, as well as for the remarkable performance of their sportier versions.

These developments led to the creation of more powerful and heavier cars, such as the Amilcar CS (Cyclecar Sport). The CS was a variant of the original CC, with a two-seater torpedo body, which debuted the cross member in front of the radiator to connect the two front wings, used on models such as the CGS (Cyclecar Grand Sport) and which became one of the manufacturer’s identifying features.

The preview: the exhibition at L’illa Diagonal

L’illa Diagonal maintains intact its status in the Rally and is once again one of the points of reference of the Barcelona-Sitges. In the prolegomena, from 7 to 19 March, the interior of its facilities will host the traditional exhibition of vintage cars open to the public. Specifically, the units on display will be a 1913 Panhard-Levassor X19, a 1926 Ford Model T and two Rolls-Royce Phantom I: a 1926 Mayfair and a 1927 Saint Andrew. All the models will be loaned by the chauffeur-driven car hire company Grup Limousines.

On Saturday 19th the Rally will officially begin with the technical verifications of the vehicles, on the pavement of the Diagonal Avenue, in front of the commercial centre. From 10:00 they will begin to enter the closed park, where the members of the jury will evaluate the state of conservation and the quality of the restoration work on each model, and will remain on display until approximately 17:00. The RACC team will collaborate in the logistical and organisational aspects of the vehicles.

During the morning, the group Atenea Carter Swing Quartet will liven up the meeting on the Diagonal, playing jazz music from the 1920s, which will be danced to by members of the BCNswing association.

At the same time, Sitges will be hosting the traditional classic car show. On this occasion, the specialist Porsche centre, Julià 911, will bring together around 20 units of the legendary German sports car, some of them more than half a century old. Those registered will take part in a cultural gymkhana that will start at 9:30 in front of the Hotel ME Terramar in Sitges. There they will start an itinerary with various tests that will take them to get to know in detail some of the most emblematic places in the area and which will end at 14:00, with the cars on display at La Fragata until mid-afternoon.

On Sunday 20th the Rally itself will take place. The participants will start arriving at the Plaza Sant Jaume in Barcelona from 8:30, dressed in clothing in keeping with the period of their vehicles, many of them thanks to the collaboration of Menkes, a specialist in the handmade production of costumes and footwear. The Barcelona and Sitges authorities will set off at 10:30.

The cars will be on display at La Fragata until approximately 5.30 pm.

As is traditional, Moritz will bring to the event its unmistakable retinue of Seat 600s, which will follow the caravan all the way to La Fragata, where a marquee of the beer company will be waiting for them.

No less striking will be the presence of Pere Ventura, who in this edition celebrates 15 years of collaboration with the Rally. His 1920s-style Fleur de Lys van will be at the head of his fleet of vehicles to accompany the event. As the official cava of the event, it will be present at all the gastronomic events held throughout the weekend, as well as at the prize-giving ceremony, where it will name the prize for the participant with the most glamorous dress.

This site uses Akismet to reduce spam. Learn how your comment data is processed.